DIAMETRALE is the first Film Festival in Austria that exclusively focuses on experimental films. On Friday, March 29th, the DIAMETRALE Warm-Up marked the beginning of its third run. Two films where shown in the Cinematograph. ULTRA PULPE, the first movie, was the perfect start for the Festival: overwhelming, absurd and far from conventional. 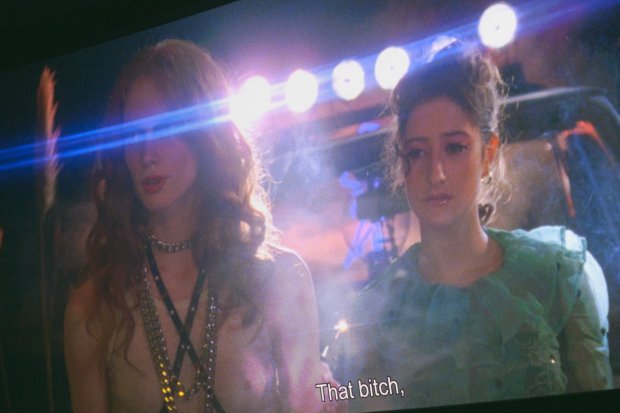 The experimental feast continued with the mockumentary, SPIT‘N’SPLIT by the Belgian director Jérôme Vandewattyne. SPIT‘N’SPLIT is about the concert-tour of the band THE EXPERIMENTAL TROPIC BLUES BAND. Vandewattyne joined the band on the road for two years. The result is a truly ambiguous movie that blends fact and fiction. In the beginning, it is very authentic and seemingly candid. As the movie continues it increasingly loses it’s touch to reality. The portrayal of touring is ambivalent as well. It is depicted as being not profitable, uncomfortable and destructive and at the same time as exciting, mind-expanding and fascinating. This message agrees with the slogan of the DIAMETRALE: “nutzlos und schön” (“useless and beautiful”). The movie ended fatally. However, all the fighting, quitting and killing was fiction. By playing a concert at the P.M.K, the band proved that they are still going strong. As chaotic, wild and energetic as ever.

komplex-KULTURMAGAZIN INNSBRUCK had the chance to ask Boogie Snake (guitar, voice) some questions:

komplex: How was the band The Experimental Tropic Blues Band formed?

Boogie Snake: The band was formed in 2000 after a jam in a photography school fest. It started as a joke, really. Jeremy and I (Dirty Cock and Boogie Snake) were already playing in a punk noise band (Seasick) very influenced by The Jesus Lizard and The Birthday Party. David (Devil D’Inferno, the drummer) was a student at St Luc’s photography school. They made this crazy jam with a small drum kit and a broken banjo, people enjoyed it so much that they wanted more. So, I joined the band later, when things got a little more serious, and used to play bass! But traveling with a bass amp was too heavy, so I traded it for a guitar, just like in the neo blues punk bands of the 90’s. Then we began touring as the interest in the band grew and grew.

k: How long have you been touring as The Experimental Tropic Blues Band?

Boogie Snake: We’ve been touring since I think 2003, something like that. Especially in Belgium. We began touring in Europe in 2006 and later even in America (USA, Canada,…). We had the great luck to play with The Cramps in a show in Brussels, Belgium. I think things started seriously from that moment on. We felt like there was nothing we couldn’t do.

k: What was the craziest touring experience?

Boogie Snake: We were invited at the Memphis In May Festival (in Memphis) to represent Belgian culture! At the time, the Mississippi was overflowing and we had tornado emergencies every day! Scary and exciting! We also had the chance to shake Jerry Lee Lewis‘ hands and talk to him in his limo. Jeremy said to him: „Hey man, do you know you’re famous in Belgium?“ He answered, like we were retards, „Of course I know“, that was hilarious… Recording with Jon Spencer in New York was also a crazy and fulfilling experience. There’s this huge creative energy in this city! We’ll always remember it!

k: What is the worst thing about touring?

Boogie Snake: The worst thing is when you sleep at someone’s house and it’s dirty, uncomfortable and cold. You know, you drive for hours and hours, play, drive, play and so on. So fucking exhausting some times. You really need a good night of sleep! Also, falling sick while touring is a nightmare… It happened a few times.

k: What is the best thing about touring?

Boogie Snake: The best? The women of course! The experience, the adventure, the unexpected. Every day a new perspective opens up before our eyes. New people, new kinds of food, of cultures. How exciting!

k: When you were shooting the movie, you were constantly observed by the camera. How did the filming affect the touring experience?

Boogie Snake: It didn’t from my perspective. I know David was annoyed a few times but… I’d say touring affected the filming. It lasted 2 years, so we got pretty used to it. It was a part of ourselves.

k: The film is a blend of fact and fiction. How much of it is real and how much was staged? Was there a lot of acting involved or did it all come naturally?

Boogie Snake: I’d say, 80% fiction, 20% fact. The live shows are 100% true though. It really did come naturally. Jerome (the film director) was telling us „You have to be like this, you’re so annoyed by the others, they get on your nerves, you can’t stand them anymore!“ or „Go on Jeremy, you have to hurt Alan (the sound engineer), he’s too kind and passive, show him your violent love“. He wrote a damn long script, but in the end, we didn’t really follow it. We kinda took control. We dug into ourselves and exacerbated things we felt and played with it. There’s no real acting, but constant improvisation. Jeremy’s very good at it. Funny thing, the transsexual masturbation in the mini movie „Il monstro Dentro“ is 100% fact! She (Suzette) invited Jeremy and Jerome for a private little show after a gig in Holland. Needless to say, it was gold material for the movie! I like how Jerome used it. It’s very discreet, respectful and artistic. It could have been very trashy, shocking and raw!